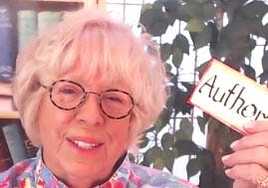 I'll help you get what you want:
agent, book contract, and
shelf space at Barnes and Noble.